Interview with Eve Burton, CLO of Hearst and Chairwoman of HearstLab - Priori
ALL POSTS

Interview with Eve Burton, CLO of Hearst and Chairwoman of HearstLab

Mirra Levitt, Co-Founder and President of Priori, interviews Eve Burton, Chief Legal Officer of Hearst and Chairwoman of HearstLab, about how to build an innovative in-house team and how she founded HearstLab, an accelerator for female-founded startups, within Hearst.

Mirra: You’ve called HearstLab a “greenhouse”, but the last place you’d expect to find one would be the Office of General Counsel at a major corporation. What led you to create this greenhouse within the OGC?

Eve: The idea for the greenhouse spawned from a conversation I had with Bill Campbell, one of the great coaches on the West Coast and someone who always believed in women. He said to me: ‘Eve, we don’t need more incubators. We don’t need more venture. What we really need is a greenhouse, a nurturing place where women who have fantastic ideas and who need a little bit of money can breathe, develop and build these ideas into reality. And what better place than Hearst corporation, famous for building and running women-focused businesses.’ And I said to Bill, “What do we know about women entrepreneurs who are building great businesses?” He said, “Eve, everything.” So that’s where it started.

The biggest obstacle that women entrepreneurs face is money. Women only get about 17% of venture money in these early stages, despite having plenty of great ideas. Even more crucial, women-owned businesses often fail because they can’t make those first couple of deals. With this in mind, Hearst’s Office of General Counsel has one really important asset to assist women who are building businesses: the skills to make deals with them and for them. We have the ability to draft these deals, negotiate these deals and close these deals.

In every regard, HearstLab has exceeded my wildest expectations. I’m incredibly proud of the teams that we’ve brought in. I’m also very lucky to have a remarkable entrepreneurial team around me — starting with Steve Swartz (Hearst’s CEO) and Lincoln Millstein (Senior VP and Special Advisor to the CEO) both of whom were immediately excited about the idea and simultaneously made me feel like I could take this risk and fail and that would be alright.

Mirra: What are your goals for HearstLab?

Eve: When Lincoln and I first conceived of HearstLab, we had three main goals. First, to find great women entrepreneurs and create a community where they can thrive. Second, to fund them and help them make some money. And third, find women at Hearst who can help them succeed. One immediate obstacle we faced was convincing the leadership at Hearst that these three goals would be doable without interrupting the flow of business at the company. Some were initially skeptical about whether it would succeed and whether we had enough bandwidth. But Steve and Lincoln are great champions to have. Lincoln said, “If we build it, women businesses and CEOs will come.” And that’s what happened.

With women-run companies, there can be a different tempo that’s both entrepreneurial, but also about how women do things. It’s an extraordinary pleasure seeing the most remarkable next generation of women doing this. We've had many fewer bumps than we've had upward projection. Thankfully, our biggest obstacle now is that we get very morose when it comes time for one of the companies to leave. We’ve had five teams that have left the lab — all on good terms and still growing — since its inception and they now have a combined valuation of $185 million.

Mirra: How do you measure the success of the Lab?

Eve: Success for us is giving our companies the room to grow on their terms. We aren’t fixated on exits. It's probably our private company orientation, but we believe that you'll actually be bigger, wealthier and more successful by not having just moved your numbers, traffic and product to an exit. Entrepreneurs don’t think in terms of exits, venture capitalists do. We prefer to think of HearstLab and the companies in it as entrepreneurs in partnership. For us, investing in fewer companies but loving them more has been a great economic model.

Mirra: Basha always finds the exit question perplexing and basically answers “What are you talking about? We're here telling you we're building a company, we’re not exiting.”

Eve: Right. Your three year plan is to have a billion dollars in billings! And actually, I believe that you guys have the opportunity to be that. You’re onto something very important. There's a lot of really smart lawyers, and much of the work they do is going to become a commodity. So if you can provide services that are easy to pay for, that are immediately available and performed by people who are super smart, I think it's an absolute story for success. The other thing that’s interesting about your company is it has both an opportunity to be really large in its own right or to be part of another company that's also servicing the disruption of the legal business. Because it's a marketplace, it could ultimately be as big as an eBay with organic growth and some careful venture investment.

Mirra: Thanks Eve! Speaking of law, what elements of your legal practice do you draw on when making HearstLab investment decisions?

Eve: I’m trained as a First Amendment lawyer with a deep appreciation for the role of the Constitution in checking government action. In this context, that translates to always wanting the little guy to win. It’s this attitude that makes investing in a small company that you believe in so enjoyable. On top of this, my legal training and job here at Hearst as a business lawyer and partner to our Hearst business leaders gives me a robust and integrated toolkit as an investor. It means I’m appropriately analytical in how I approach all sorts of businesses, problems and investment decisions.

Mirra: We’d love to spend a few minutes talking about the Hearst Office of General Counsel. What was your initial vision for the department?

When I arrived at Hearst, I had the unusual experience of being able to build a team because there had been a generational transition at the company. With this changing of the guard, we had the opportunity to reimagine what legal services meant and how we wanted to structure it. Up to that point, being a General Counsel traditionally meant hiring outside counsel and managing them. But I didn’t find that very interesting. My goal was to do the majority of the work in-house and to bring the smartest people we could find onto the team to do it. People said ‘You won’t be able to do that.’ I responded by saying ‘That’s what an entrepreneur does.’ An entrepreneur goes out and finds the right people, convinces them on the importance of the mission and gets going. I felt I was building a company within a company as an entrepreneur.

Mirra: You’ve assembled a group of incredibly smart, thoughtful and genuinely nice lawyers on the basis of that vision. How did you execute on it?

We now have a group of lawyers who own the company, own the clients, own the service and own the wins. For example, our team has class action litigators who aren’t afraid to take big risks with support from Hearst executives because together they are representing their Hearst companies. This structure enables people to be on teams that experience big wins. And big wins create rare comradery; they build teams of people who appreciate each other. Building this sense of community has been incredibly important. The same applies for our Mergers and Acquisition lawyers who work at the hip with Hearst business leaders to structure complex and creative deals across the company.

Finally, in addition to keeping the interesting work, in order to attract the right people you have to pay them well. Lawyers who can win important class action lawsuits and lawyers who know how structure corporate acquisitions cost a lot of money, and so you have to accept the resulting expensive fixed cost structure. We don't train young lawyers here, we don't hire young lawyers who are inexpensive to do small things – because that is just a recipe for sadness. Instead, we bring in people who are really well trained and pay them really well to do complex, interesting work…and we send the other legal work out. That’s what every General Counsel should be doing — and that’s why I think Priori is a spectacular idea.

Mirra: What is your advice for lawyers looking to innovate in-house or within law firms?

Eve: Lawyers are not, by nature, the most innovative breed. So I think my advice to lawyers would be to find a General Counsel or senior team that wants to experiment and then take some risks. Do things you wouldn’t otherwise do. Understand that innovating sometimes means failing. If you don’t take risks, you won’t innovate. If you don’t innovate, then you don’t get special results like the HearstLab. You can’t play the odds, you have to play the ideas. 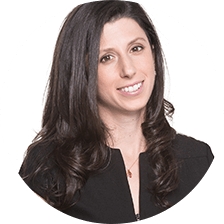 Mirra Levitt is the General Counsel and Co-Founder of Priori Legal. Before Priori, Mirra worked as an associate at Covington & Burling LLP, a financial analyst at Goldman Sachs and was a Henry Luce Scholar in the microfinance program in Save the Children’s Hanoi, Vietnam office. Mirra holds a J.D. from Yale Law School and an A.B. from Brown University and is a member of the New York and Massachusetts Bars.

You may also be interested in...
Priori and Wolters Kluwer Legal & Regulatory White Paper: The...
How to Scale Your Legal Department: 7 Best Practices from the...
Event Recap: "Fake News" & Digital Platforms
Like what you’re reading?
Sign up to get updates.