The Myths And Consequences Of Misclassifying Independent Contractors - Priori
ALL POSTS

The Myths And Consequences Of Misclassifying Independent Contractors

This post is part of Priori's new blog series "From Our Network," where we feature lawyers in our network discussing important issues small businesses face. Today's piece is by employment lawyer Kristine Sova, addressing the classification of workers as independent contractors vs. employees. In recent months, states, including New York, have cracked down on the misclassification of workers, so it's critically important that businesses understand the what's at stake.

Many businesses rely on independent contractors, instead of employees, for their staffing needs. The reasons for doing so are obvious – among them, savings in labor costs. But misclassification of a worker as an independent contractor (as opposed to an employee) may have a number of legal consequences for a business, including:

These consequences can be costly, because many of the back payments and penalties cover multi-year periods.

To complicate matters, there is no single test for determining whether a worker is an independent contractor, with many of the administrative agencies in charge of doling out the various penalties above adopting their own tests.

For example, for federal tax purposes, the IRS looks to common law rules examining the relationship between the worker and the business to determine whether a worker is an independent contractor or an employee. Three specific categories of evidence are typically considered: (1) the degree of behavioral control that the business can exercise over the individual; (2) the degree of financial control that the business can exercise over the individual; and (3) the parties' views and perceptions of the relationship (that is, whether they view it as an independent contractor or an employment relationship). Under the federal Fair Labor Standards Act, however, an employer-employee relationship is not determined by these common law rules; rather, the U.S. Department of Labor applies what is known as an “economic reality” test comprised of seven factors.

To cover each of these tests, and the many more that exist, here is beyond the scope of this post. There are, however, a number of common misconceptions about the use of independent contractors that are sure to get businesses into hot water. 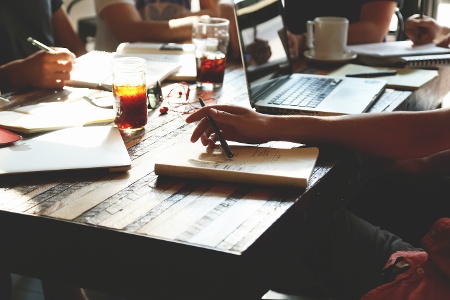 Myth #1: The worker wants to be treated as an independent contractor, so it’s ok.

Also keep in mind that what a worker wants at the beginning of working relationship will likely be wildly different from what the worker wants when the working relationship comes to an end. Case in point: all of the businesses I know that have been subject to independent contractor audits were audited because a former independent contractor claimed to be an employee and applied for unemployment benefits. The result for one such business was payment of back taxes and penalties of roughly $30,000.

Myth #2: You’re in the clear if your business has an independent contractor agreement with the worker.

Myth #3: If your business is new or small, you can get away with treating your workers as independent contractors.

Neither the age nor the size of your business is a factor in determining whether a worker is properly classified as an independent contractor. If your business misclassifies workers, and is ever the subject of an audit, you better believe that the auditing agency will seek back payments and penalties as far back as legally possible.

Do any of these faux pas sound familiar? If so, your business should take a closer look at its independent contractor relationships.

A version of this article was originally published by Kristine on her law firm blog. Her blog can be enjoyed at www.sovalaw.com/blog.

Kristine launched her solo law practice in 2012 with an eye towards serving her clients in an effective, economical, and personal manner. To that end, Kristine has established a practice with the experience and the flexibility needed to quickly adapt and respond to the unique needs of each client, while providing cost-conscious, result-oriented legal services of the highest quality.

Kristine is a member of the Board of Directors of Dance/NYC.

You may also be interested in...
A 10-Step Guide to Handling Employee Discrimination Claims
The Delicate Game of Employee Negotiations
How the New Overtime Rules Will Affect Businesses, Practicall...
Like what you’re reading?
Sign up to get updates.